It's week two of rehearsals for Peter and the Starcatcher. There have been a few concerns about spoilers, so as we move into some of the scenes toward the second half of the show, we'll do our best to avoid giving away anything crucial. Keep in mind, too, that what you see in the photos at this stage is going to change dramatically by the time we get to the end. If you're feeling brave, this way lies adventure! 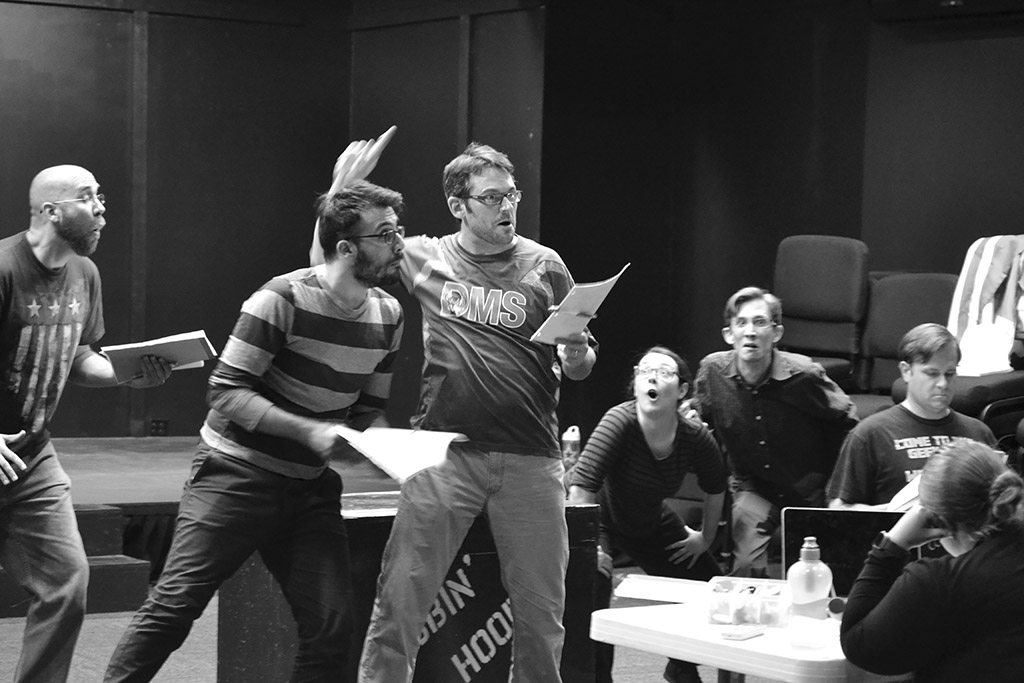 It’s good to be back at the theatre, even though the Coffeehouse space is a bit smaller than some of our borrowed rehearsal spaces from last week. We won’t move onto the mainstage in the theatre for a few more weeks – Private Lives is still running (and if you haven’t checked it out yet, you should. The reviews are great), and their sprawling set takes up most of the stage.

Speaking of which, Bob Myers is finally joining us tonight for the first time since we began. He’s currently the lead in Private Lives, but for Starcatcher he’ll be stepping into the shoes of Molly’s father, Lord Leonard Aster. We avoided the few scenes we needed him for last week, but tonight we’re focusing on one in which he features. Jessy spends the first thirty minutes or so catching him up on the blocking he missed, while the rest of the cast works on music with Gerry. 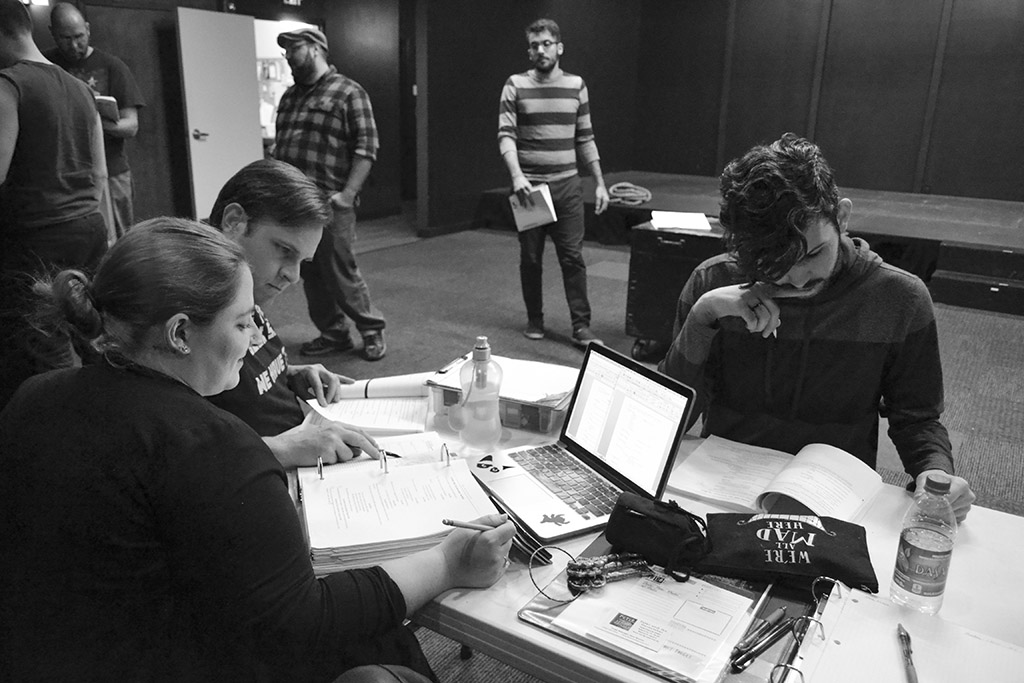 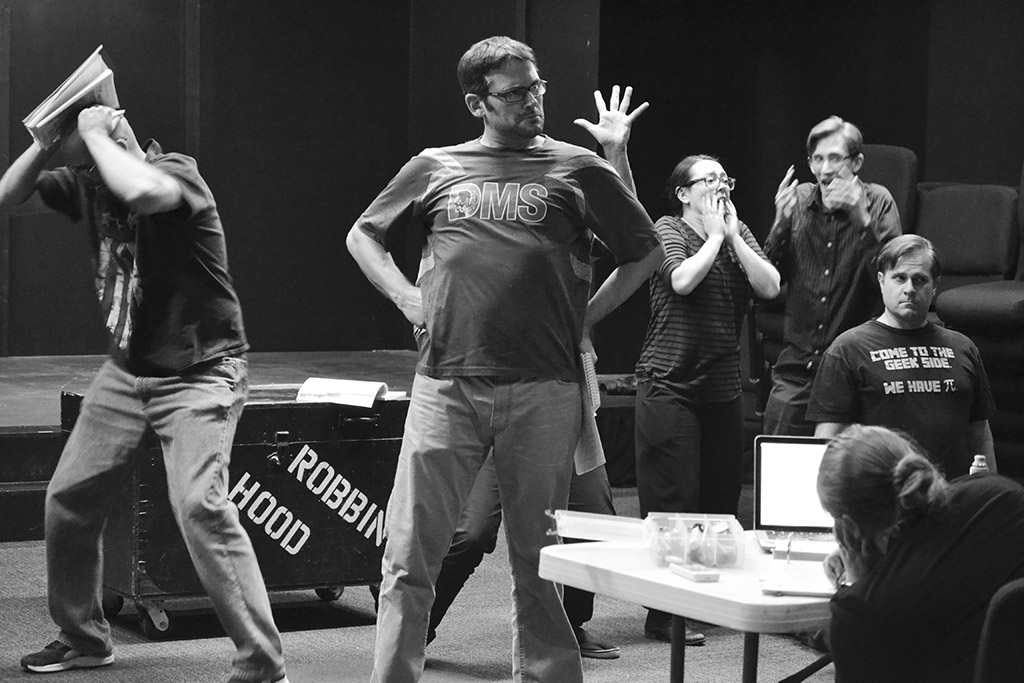 The scene we’re working tonight (without too many spoilers) is the one in which the pirates are revealed as pirates. Gerry is there to work some of the music into the scene. There’s a lot of underscoring, compared to other shows. It’s there to punch up comedic moments, or to give emotional connection to more intimate scenes. Derek spends a lot more time tonight on specifics, giving acting and diction notes in addition to blocking, and really focusing on developing some of these characters into who they will eventually become. 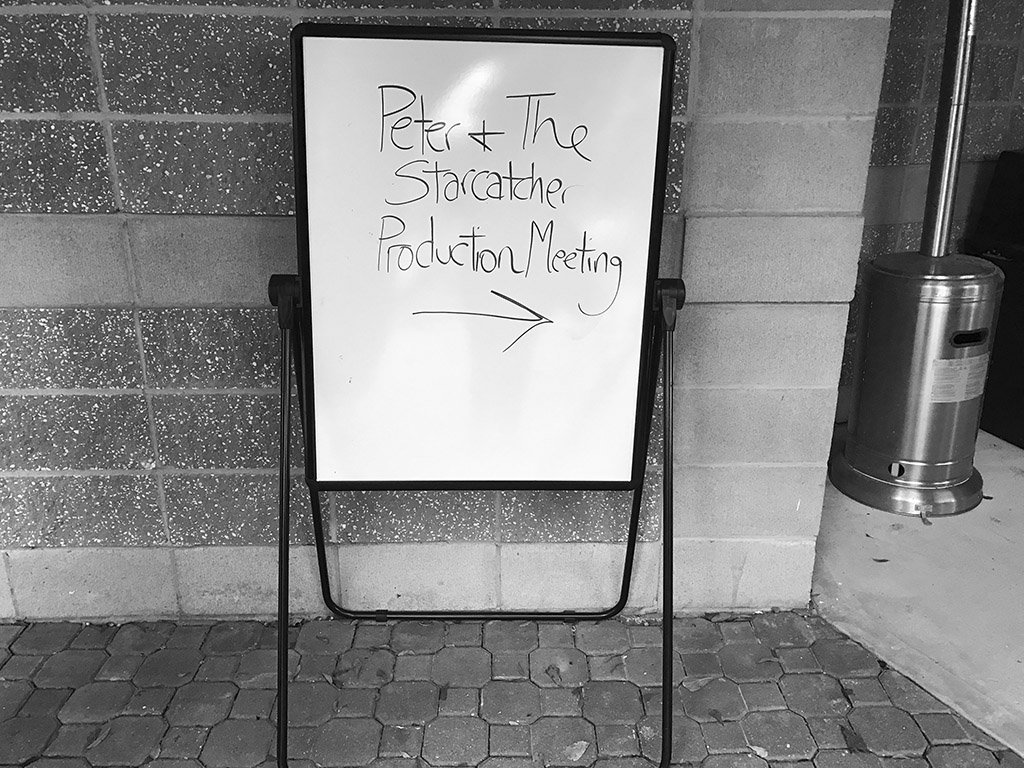 Tuesday marks the show’s second production meeting, which is a meeting between the production staff to discuss any new developments or progress made on the technical aspects of the show. Present tonight, in addition to the director and stage manager, are the people in charge of lighting, sound mixing, and props. We spend a lot of time discussing some of the lighting challenges this show will present, run through some of the sound issues, then move on to props. Our budget is pretty standard for a musical, but it’s not exactly on par with Broadway. We have to hunt for props, searching out online deals, or scouring thrift stores. Tonight we get a small surprise as we discuss the need for a model ship. Ian, our sound mixer, pipes up as we discuss purchasing one online. “My grandfather makes model ships, he might let us borrow one.” Derek reminds him that this is something that’ll be used on stage, and it can’t be delicate or easily breakable. Ian doesn’t think that’s a problem, but he’ll check into it for us. That’s one (possibly two) props down, only fifty or so more to go.

At rehearsal, though, we’re not thinking much about ships. Tonight we’re working one of the musical numbers – a chant-like bit that’s less singing and more rhythmic speaking, with some call and response. Gerry takes the cast through it several times, tweaking their timing. Then he tells them to scatter around the space. “We’re going to spatially realize our dynamic,” he tells them. This means putting them into their various character groups and having them move and march around, improvising their movements to go along with the words they’re chanting. It’s silly and fun, and by the end of it everyone is out of breath, but the number is stronger.

It’s by no means the end, though. Derek rearranges the cast into the formation they’ll be using during the number and begins to walk them through the complicated movements they’ll need to pull off at the same time as the music. We run the scene, and the song, several more times, cementing as much of it as we can in the cast’s minds. When we run this again, in a week or so, we’ll be adding props to the mix. 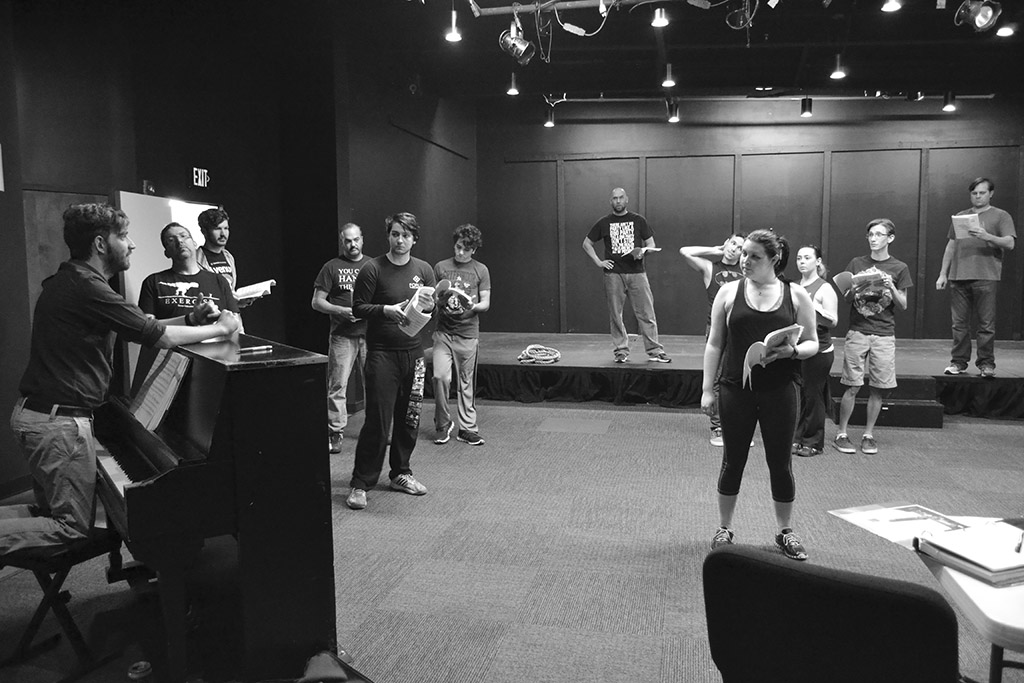 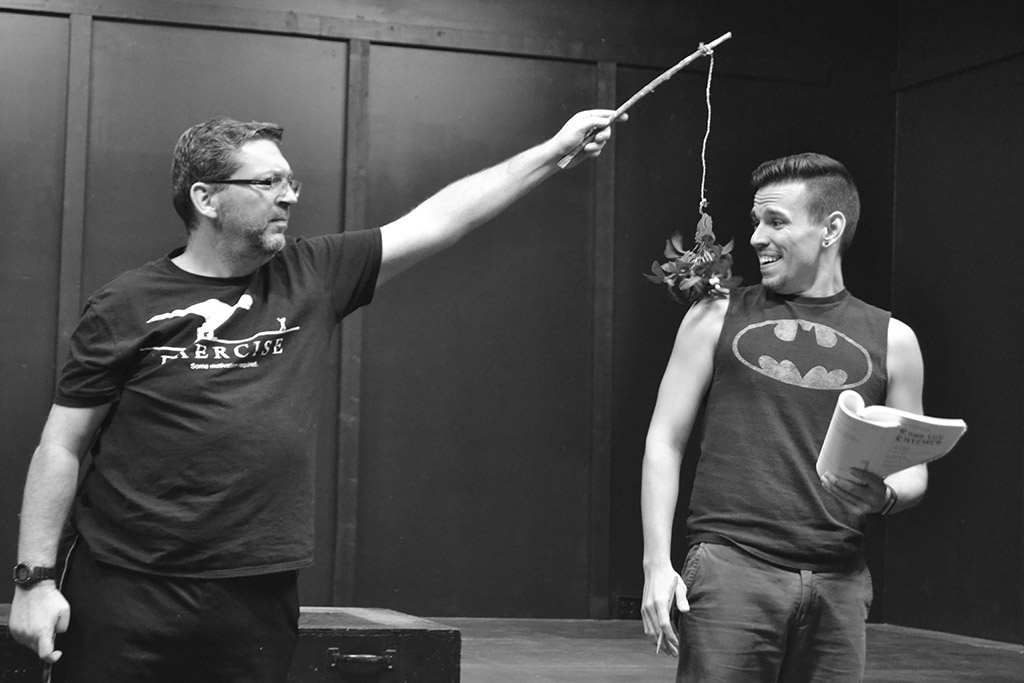 We move on to the next scene, but there’s some question about a particular prop and who will be operating it. Daniel Gray gives it a go with a rehearsal version of what will eventually be a more complicated prop. Keith does his best to interact with it, even if it’s just a sprig of fake mistletoe on a string. We try it again, this time with Melbin Borrero attempting the same scene using just his hands in a pair of gloves. Either way, it’s hilarious, and Derek is still musing over which we’ll go with when we finish up the night. 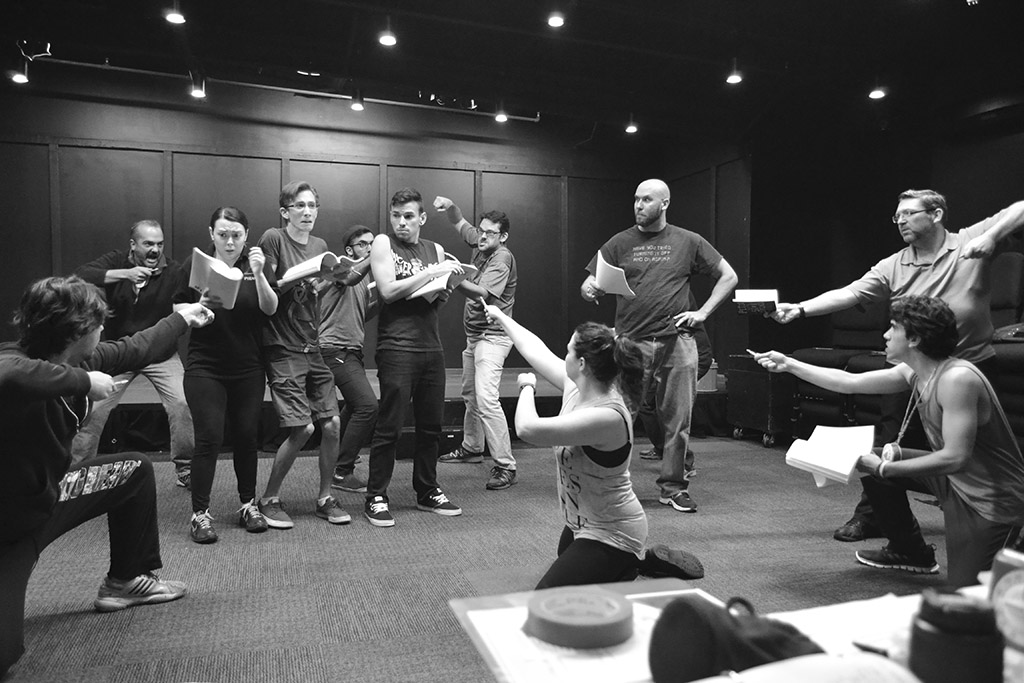 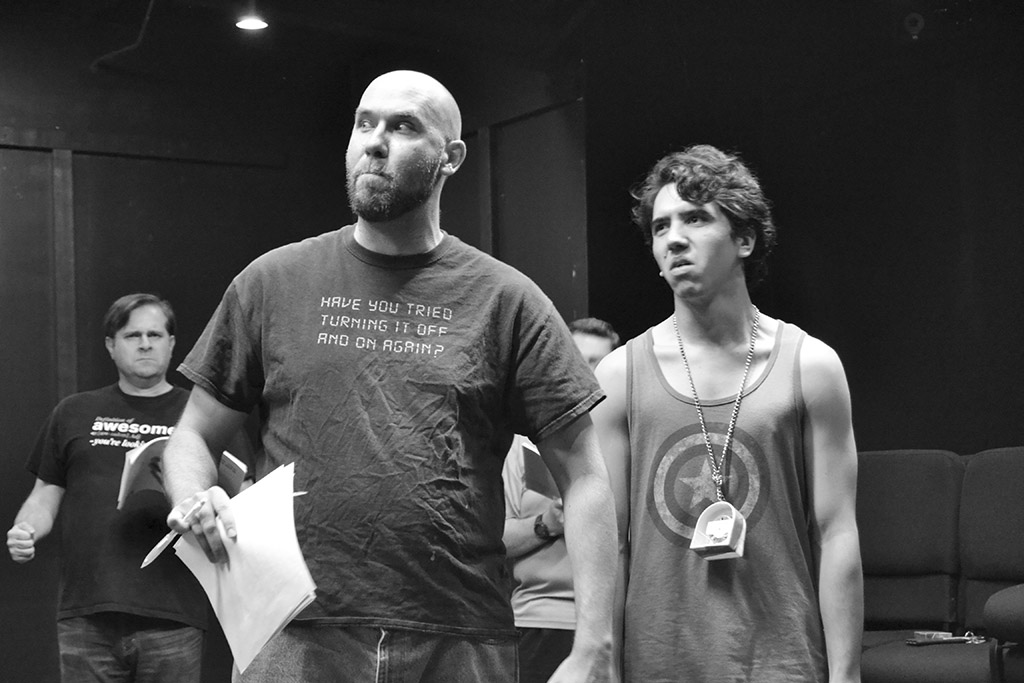 We pick up where we left off the night before, finishing out the previous scene and moving into the next one. This is one of those scenes that needs props to work, so we quickly rig up some rehearsal versions of things with a little masking tape. Rehearsal props, generally speaking, are not the final props that the audience will see in the show. They’re more like stunt props that stand in for the real thing, and they can take a beating until the cast figures out how to use them.

Due to the nature of the script, many of the actors play multiple roles throughout – and this is one of those scenes: Michael Tamayo and Melbin Borrero get to become bigger characters for a little while. Meanwhile, Megan Preston (Molly) and Bob Myers (Lord Aster), become random island characters for a bit. It keeps this ensemble feeling even keeled – while there are definitely a few who are considered “leads,” everyone else gets their moments to shine, too.

We spend a portion of the night working on one of the bigger “effect” scenes in the show. Derek passes out some rehearsal props for the cast to work with and demonstrates how they’ll be used. We run the scene, pausing briefly when we get to a moment when Molly surprises Peter with a kiss. Megan and Keith have shared the stage several times, coming very close to kissing during last year’s comedy “The Underpants,” but this is the first time they’ll have to actually go through with it. Kissing scenes can be handled many different ways during rehearsal, but Megan and Keith opt for the band-aid approach. “You’re not sick, I’m not sick, let’s do this,” Megan says. They do, we move on. 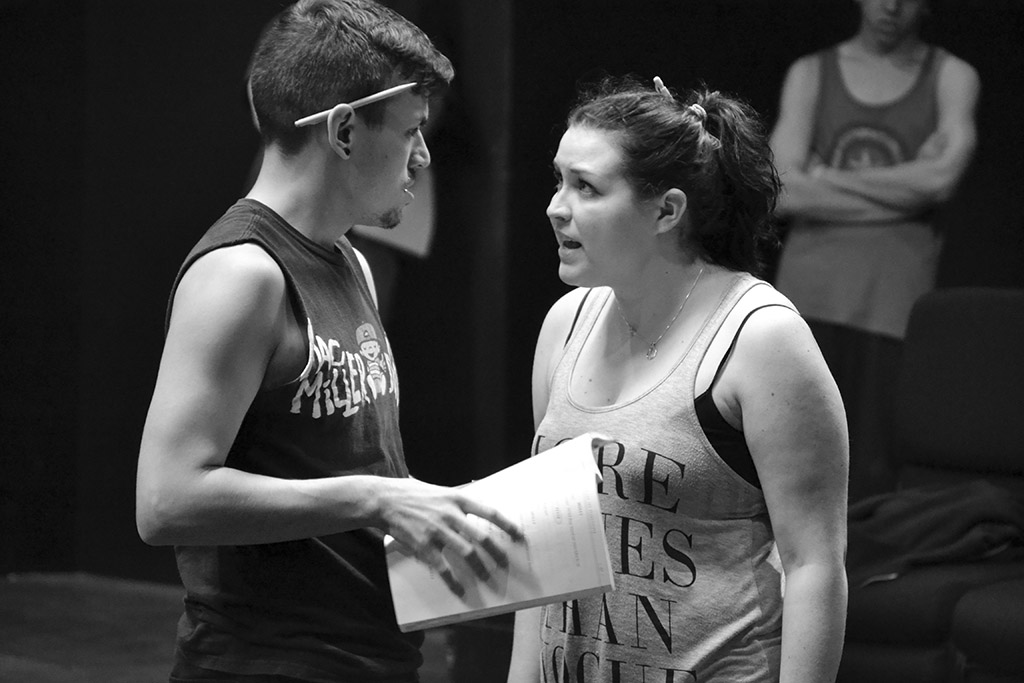 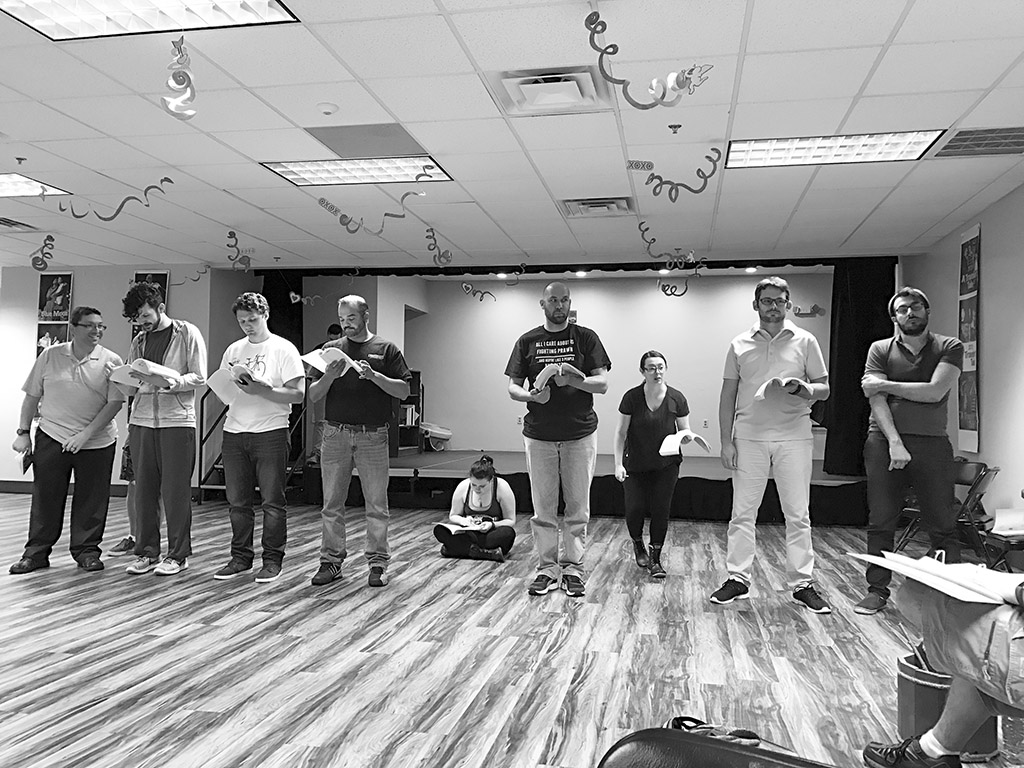 Tonight we’re back at Pyramid for one night only, to accommodate a pick up rehearsal for Private Lives. We’re down four actors tonight (Bob’s in Private Lives, Doc is out with the flu for the fourth night in a row, and Melbin and Demitri have to work). It’s what you do when you don’t have paid actors: you juggle things as needed and try to imagine the invisible people. Luckily, tonight’s not too bad.

The actors are jogging in place, in formation, while we attempt to time out music with lines. The script contains many tricky bits like this, where the actors step out of character and become narrators, sometimes for only a line or two. This is storytelling at its most complicated, and Derek, Gerry, and Matt are intent on getting it right. “Megan, there’s a tiny pause before ‘and falls’,” Gerry says. Megan nods and when they run it again she adds the pause and the line works better with the rhythm of the song. Tiny little adjustments, things the audience might never notice, are sometimes the key to making an entire number work. 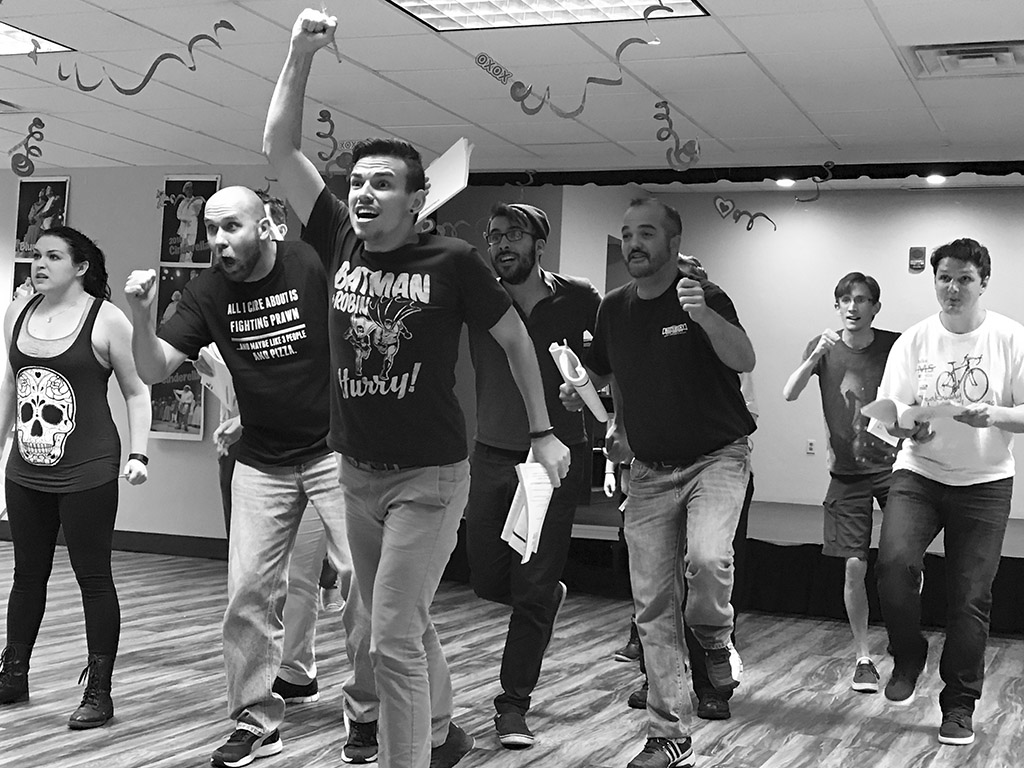 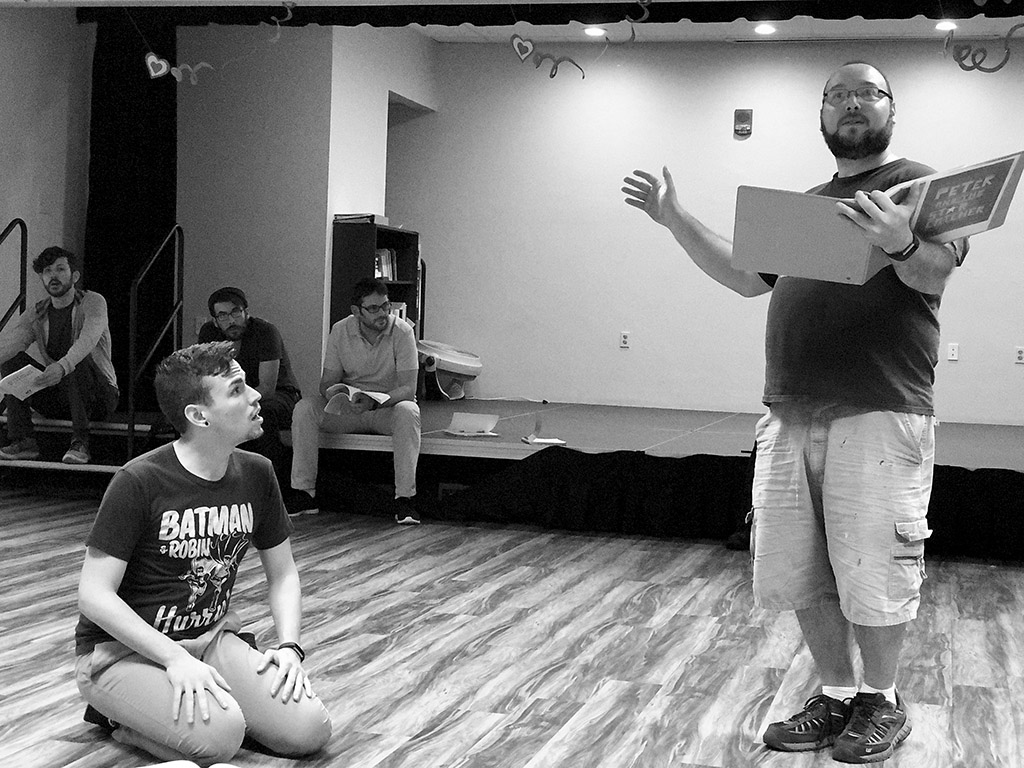 Doc is out with the flu, so Derek fills in for him in a scene with Keith, so that Gerry and Matt can time out the music right. This is one of the more amusing scenes in the show, so I don't want to spoil it with too much description. However, Derek puts on his best "Mrs. Doubtfire" voice and amuses all of us.

We wrap up early, but rather than send everyone home, Derek has the cast work on music with Gerry and Matt. They go back to the big number from last week that was giving them trouble, sorting through the harmonies and tweaking here and there. These are things the cast will have to practice on their own between rehearsals. 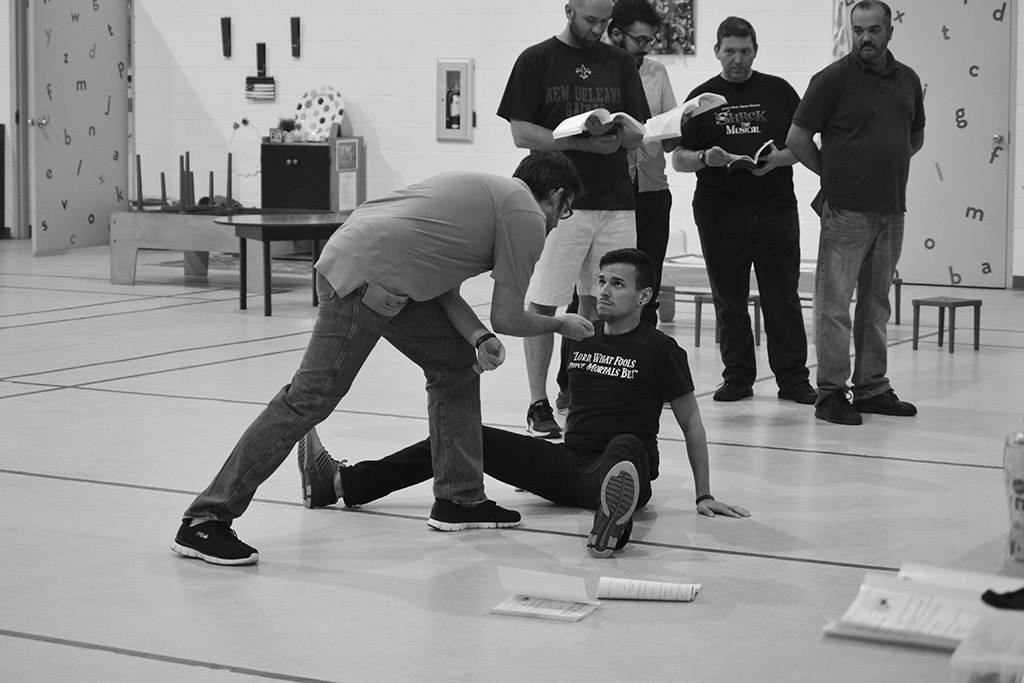 Preschool gym night again, and almost everyone is running late. Derek calls on his way over, he’d stopped to pick up a ukulele and he’ll be about five minutes after seven. Matt and Gerry walk in about the time he’s pulling up. Two or three of the cast slip in the door just ahead of him, and poor Melbin got his rehearsal locations mixed up and went to Pyramid. Now he’s trying to get a cab across town. Doc’s still sick, Bob’s in a show, JC and Jessy are working the same show, and Megan’s out due to a stomach bug (and Keith is freaking out in case it’s not food poisoning). It’s clearly going to be one of those nights.

And yet … we go on. Once everyone who can make it arrives, we get to work blocking the first half of the final scene of the show. It’s tricky, since several actors are doubling for their missing comrades, and there’s a lot of pausing while we write blocking notes. “Sam, are you standing where Teddy should be standing or where Molly should be standing? You’re Molly right now? Got it.”

There’s a lot of laughter, though, when Nate and Andrew start chewing the non-existent scenery, and we get through the blocking in record time. Derek outlines some of the fight work that’ll happen, but there will be a day later set aside for that. 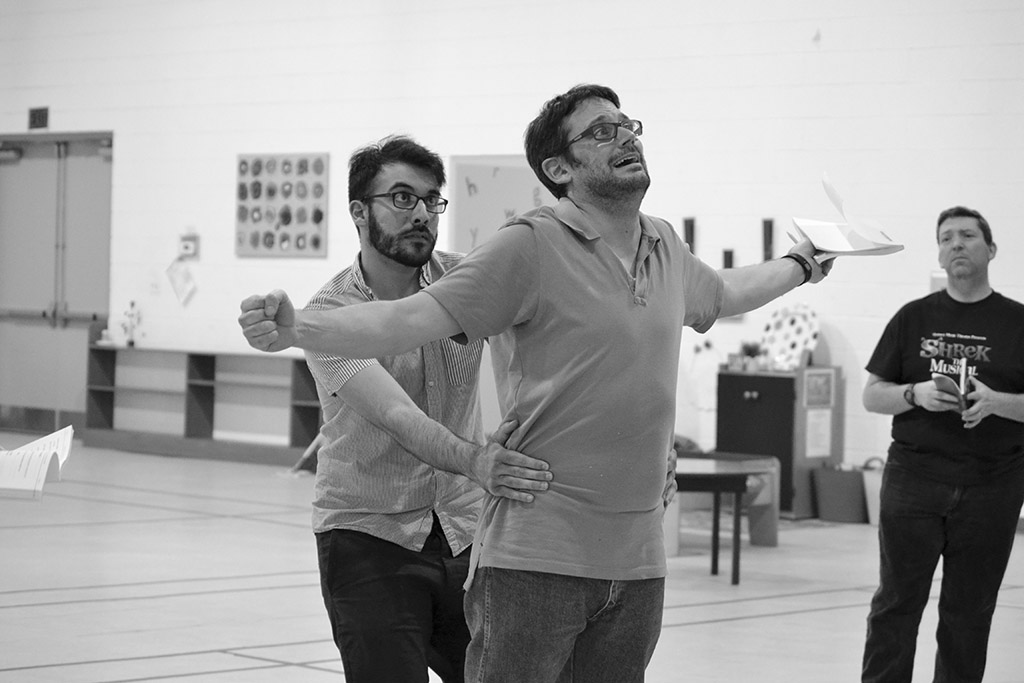 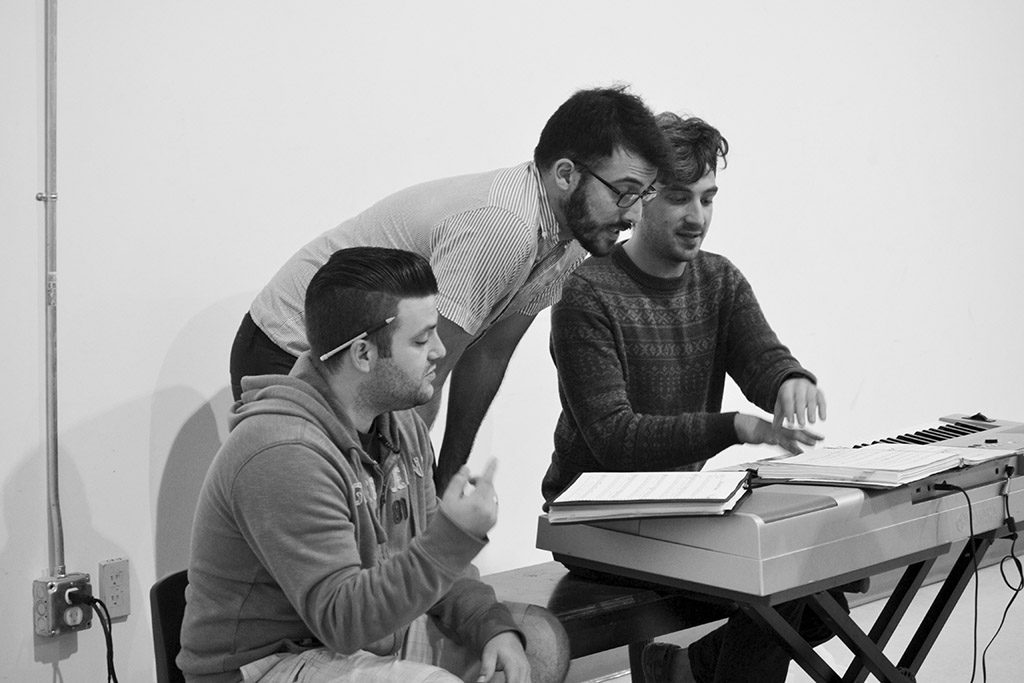 When we’re finished, Derek sends almost everyone home except Andrew, who gets to stay and work his short solo number with Matt and Gerry. Eventually, he’ll have to learn to play the ukulele to accompany himself in the number, but for now, Derek strums along and gives a few notes on how he wants to hear Andrew sing certain lyrics. It’s a catchy little tune, and when we wrap, we’re all humming it as we head home for a well-deserved weekend of rest. 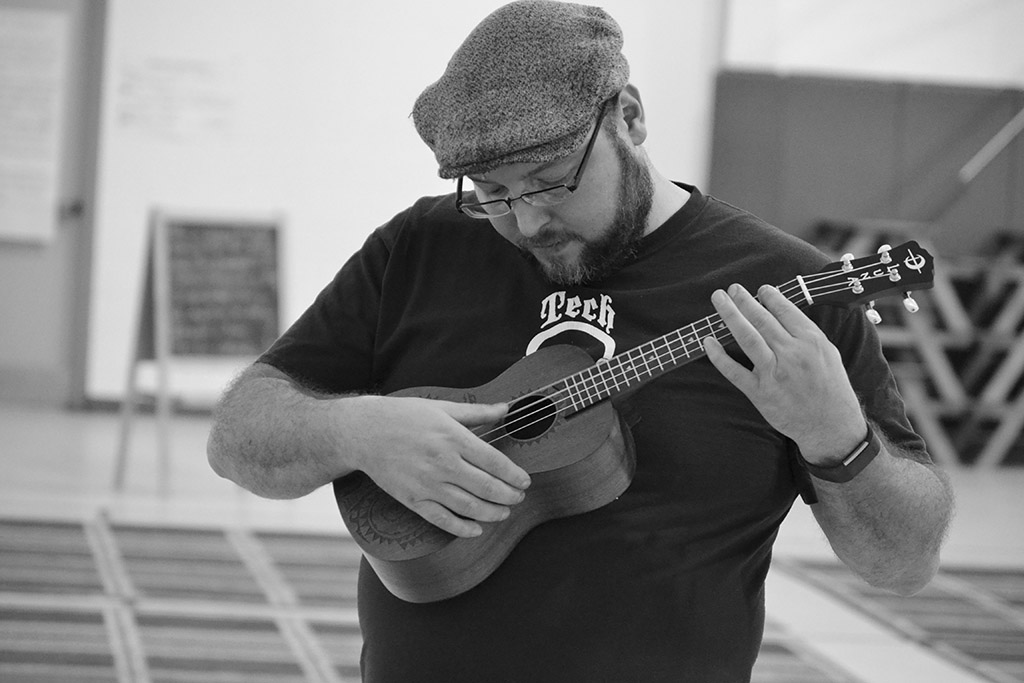 Interested in seeing Peter and the Starcatcher? This show will run March 16-April 2. Get your tickets here.

Behind the Scenes: Peter and the Starcatcher – Week 3

Behind the Scenes: Peter and the Starcatcher – Week 4

Behind the Scenes: Peter and the Starcatcher – Week 5

Behind the Scenes: Peter and the Starcatcher – Week 6

Behind the Scenes: Peter and the Starcatcher – Week 7